Prejudice–2nd on the List of Deadliest Infections Inhabiting Organizations 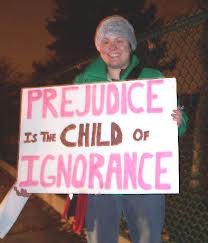 It occurs to me as I write this blog that my rhetoric will not change the mind of the bigot. The bigot will not amend her racist thoughts, his sexist actions. The bigot will continue to discriminate against persons of color, women of all races, the LGBT community, and the person whose nationality is not “American.” The bigot will have checked out of this blog by now, or most likely never have started reading. I’m not writing for the bigot. I’m writing for you and me, the silent majority. Those of us in positions of moderate power, or those of us in positions of serious power, and those of us with very little power, but all of us who recognize that the system in which we all participate has a sour history of exclusionary practices where some groups of people have had an advantage over other groups. I’m writing for us, the people who know that we have not been playing on an even field.

It’s been fifty-one years since President Kennedy made affirmative action a national policy to even that playing field for people of color, people of minority religions or foreign national origin. It has been forty-six years since the policy was amended to include women. And while affirmative action has long been a subject of debate regarding effectiveness and moral veracity, it serves as acknowledgment that inequality is a historical fact. That’s a bigger deal than you might imagine. We don’t teach the history of U.S. oppression upon its citizens nearly as much as we teach Social Darwinism and rugged individualism-the notion that people should pull themselves up by their own bootstraps, and if they aren’t successful, it’s entirely their own fault.

Public education has socialized us well for free trade, capitalism, and the entrepreneurial spirit that birthed the countless innovations of our American system. As a business owner and entrepreneur, I embrace the opportunities our cultural individualism promotes. But I also recognize that opportunity is not dealt out in equal amounts. While women make up 51% of the workforce, women held only 16.1% of Fortune 500 board seats in 2011.  And among corporate officer positions, women held only 14.1%. In addition to gender, it’s important to note that in 2011 People of Color comprised 36.2% of the population, yet only 11.9% were executive senior level management.

These statistics certainly don’t tell the entire story. Education and who has greater access to it is another factor. For women of all races, rearing children plays a tremendous role. What is certain is that women and minorities are less likely to be promoted into positions of power and therefore do not participate in the decision-making processes of large companies.

So why is this bad business? As we become a more openly heterogeneous society with shrinking resources, we have to ask, how will we sustain ourselves? And if companies wish to survive, they need to ask the sustainability question too. The answer does not live in a vacuum. The answer is in our diversity. If we’re to sustain ourselves, to really flourish, we need to tap into the life experiences of the children of the working class, of multiple cultures, of the alternative perspectives of non-Christians, of the LGBT community, and of the fathers and mothers of the generations to come. The diversity of our experiences is far more likely to engender the innovations necessary for our survival. And innovation is what we need right now. It’s just good business.